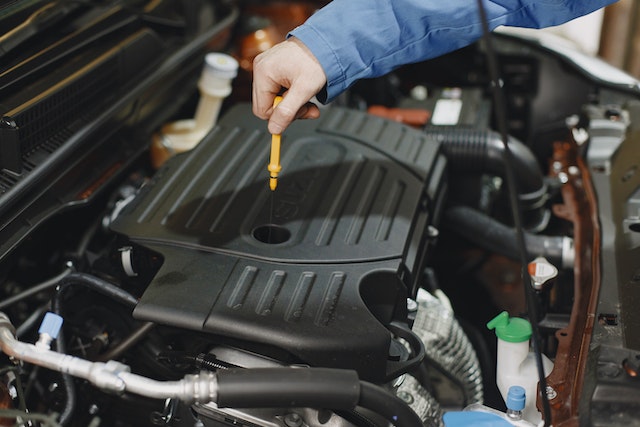 Oil is one of the most important fluids for combustion engines. It lubricates the metal components inside the engine, therefore reducing friction from the metal-on-metal contact. Without proper oiling, the internal engine components can get seriously damaged leading to thousands of dollars in repairs.

Lots of older engines suffer from oil leaks and excess oil consumption which can lead to low oil levels and cause a warning light to illuminate on the dashboard. This can happen when driving which might leave you to wonder whether it is okay to keep driving with low engine oil, or not.

This article is going to discuss whether you can drive on low oil, how to fix this issue, and what problems can be caused from driving on low oil.

Engines typically hold more oil than they actually need to prevent the levels from getting too low. However, a bad oil leak or a lot of excess consumption can cause oil levels to decrease beyond the minimum required level. When this happens it can cause a number of serious engine problems, such as the following:

The first serious problem that can occur from low oil levels is excess wear to the metal components inside the engine. For example, if the pistons don’t receive enough oil it can cause them to rub on the cylinder sleeves which will wear down on both the piston itself and the sleeves. This can then ruin the seal between the piston and the cylinder causing a lot of oil blowby and even cause metal shavings to end up in your engine oil.

It can effect just about every metal component inside your engine. Ultimately, the extra wear and stress that this causes the engine will decrease the engine’s lifespan and can result in premature engine failure.

Timing chains are a critical engine component and are usually one of the first systems to be affected from low oil levels. The timing chain is a gear-driven system that controls the opening and closing of the intake and exhaust valves. Because the timing chain and the gears are metal it is subject to a lot of friction and therefore needs a lot of oil to be properly lubricated.

When oil levels get low it can starve the timing chain of oil which increases heat within the timing system and can cause timing chain failure. When this happens it can throw the timing of the engine off and even cause the valves to collide with the pistons. If this happens you will need a pretty serious engine rebuild or a new engine.

Less oil means more friction, and friction produces a lot of heat. This heat can cause the engine to get too hot and overheat. This can take out the cooling system and even cause serious internal problems. Overheating is a common cause of cylinder head cracks, gasket failure, and so on. So overheating is a serious problem that can lead to a lot of expensive to fix problems.

Can You Drive on Low Oil Levels?

Driving on low oil levels can cause a lot of serious and expensive problems. Therefore, no you shouldn’t ever drive if you have low oil levels. Pretty much any gas station sells oil by the quart so if you get a low oil light while on the road we recommend stopping as soon as possible and filling up on oil.

Some engines can tolerate low oil levels better than others. Engines have oil galleys that control oil flow. Low oil affects every engine differently depending on the flow of oil through the engine and its systems. Sometimes the timing chain is the first part to be starved of oil, and sometimes it is the last. Ultimately, you can get away with driving on low oil levels on certain engines more so than others, but it is never recommended. The lower the oil level the more serious the problems will be and the sooner they will occur.

Ultimately, no it is not safe or recommended to drive with low oil.

Fixing low oil levels is as simple as filling the engine up with oil. The oil fill is almost always in an easy to access spot within the engine bay so no mechanical skills are required. Gas stations sell oil which makes this easy to fix if you run into a low oil situation while on the road.

However, there are some way to prevent low oil levels from arising. If you frequently have low oil levels then there are probably some underlying issues causing it to reoccur. Here is how you can prevent it:

Engines naturally lose oil from consumption and from oil leaks. The longer you wait to change your oil the more oil will either get consumed or leak out. Waiting more than 5,000 miles is an easy way to run into low oil levels. A lot of newer cars have oil life changes of 10,000+ miles, but we never recommend waiting this long no matter what the manufacturer says. There is a really strong correlation to oil change frequency and engine reliability.

Ultimately, changing your oil frequently will make sure it is always fresh and topped up to optimal levels.

The worst of engines probably consume 1 quart of oil for every 2,000 miles. If you are losing more than 1 quart before that many miles then there is a very high likelihood that you have an oil leak. Oil leaks are common from the valve cover, head gasket, oil filter housing, oil pan, and rear main seal to name a few. You should notice oil dripping onto your driveway or visible oil sludge on the engine block.

Fixing oil leaks will prevent low oil levels from reoccurring and therefore minimize the likelihood of having a serious problem from low oil levels.

Oil is one of the most crucial fluids for an engine. It ensures all of the metal components are properly lubricated so that friction doesn’t lead to engine components failing quicker than they should. Oil is therefore one of the most important maintenance items for any engine – changing it frequently and making sure it is always topped up.

Low oil levels can cause catastrophic damage, like piston ring failure, timing chain failure, bad bearings, and so on. All of these issues will require serious engine rebuilds, or a new motor. Therefore, driving on low oil is a risky move and can lead to thousands of dollars in repairs.

The easiest way to prevent low oil levels is to fix any oil leaks and get frequent oil changes. We recommend oil changes every 3,000 to 5,000 miles regardless of the manufacturers oil service life.

Overall, driving on low oil levels is a really bad idea that can end up costing you a lot of money. Always top up oil levels when they are low and stick to frequent oil changes to maximize your engines reliability and lifespan.