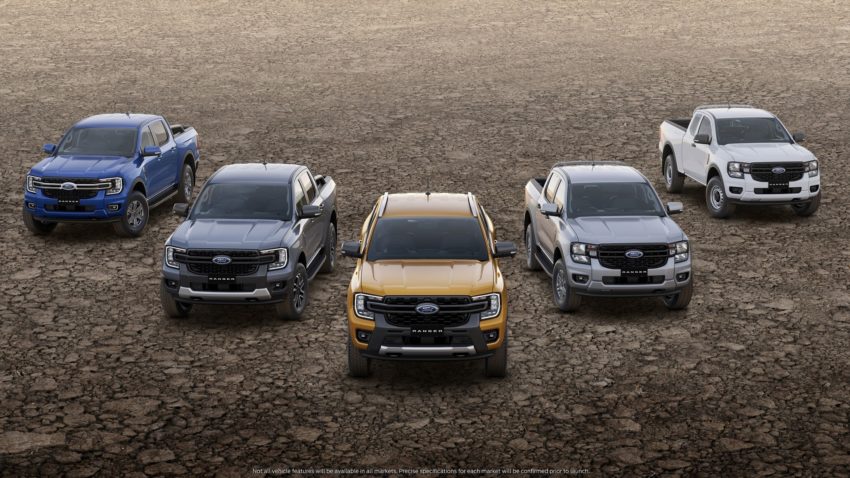 Ford gives us reason for gratitude as they unveil the new Ranger international market model.

Billed as the “smartest, most versatile and most capable Ranger ever,” the next-generation pickup builds on the legacy of its predecessors while also embracing comfort, technology and improved capability.

Its ‘newness’ is immediately apparent as the model adopts a bolder design that is in keeping with the Maverick and F-150. One bar is placed on top of a more prominent grille and leads to new C-shaped headlights. These headlights are distinguished by their stylish daytime running lamps and Matrix LED technology.

Another highlight is the sculpted head and strong bodywork, which largely ignores its predecessor’s soft curves. It is still instantly identifiable by its distinctive shoulder line and familiar greenhouse.

While the rear is less evolutionary, there are distinctive taillights as well as a modified tailgate that features Ranger lettering. Those aren’t the only changes as the model features a new rear bumper with side steps, which help to improve access to the bed.

While Ford didn’t go into many specifics, we can see SuperCab and SuperCrew body styles as well as a rugged Wildtrak trim. Ford announced that it will be selling nearly 600 accessories factory-backed, including those developed with ARB.

Your bed will work almost as hard as you do 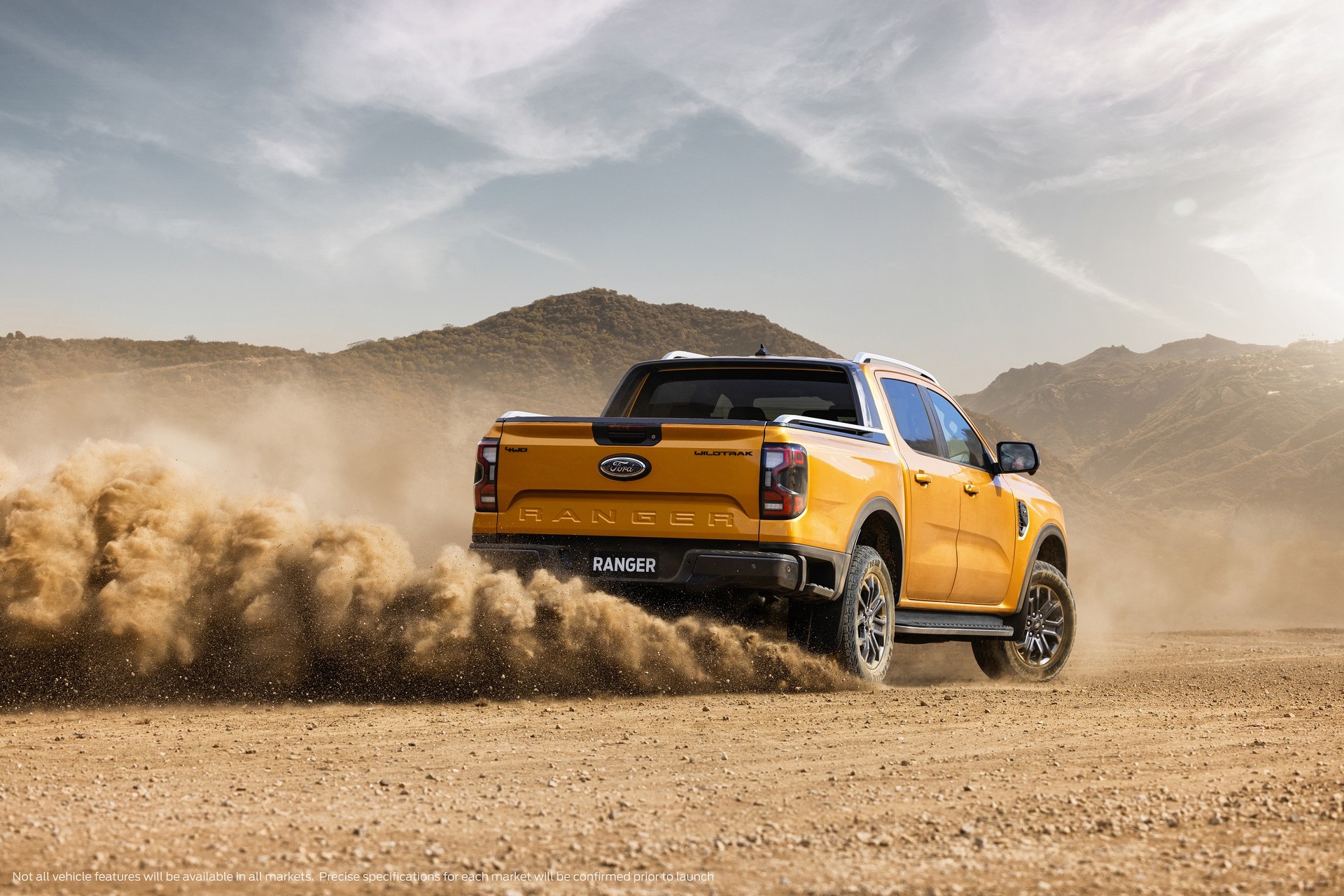 One of the biggest selling points of a truck is its bed and it’s slightly larger than before as the redesigned Ranger has a 2 inch (50 mm) wider track and a 2 inch (50 mm) longer wheelbase.

It has a larger size and features a bedliner with additional tie-down points. They’re joined by spring-loaded cleats on the sides of the cargo box as well as a new cargo management system that features moveable dividers.

However, that’s just the tip of the iceberg as the tailgate can function as a mobile work bench. While this isn’t too unusual, Ford said the tailgate has an “integrated ruler and clamp pockets to measure, grip and cut building materials.”

The zone lighting system provides 360 degree illumination during the night, and is another interesting addition. It is a great tool for contractors or those who need to complete last-minute jobs. 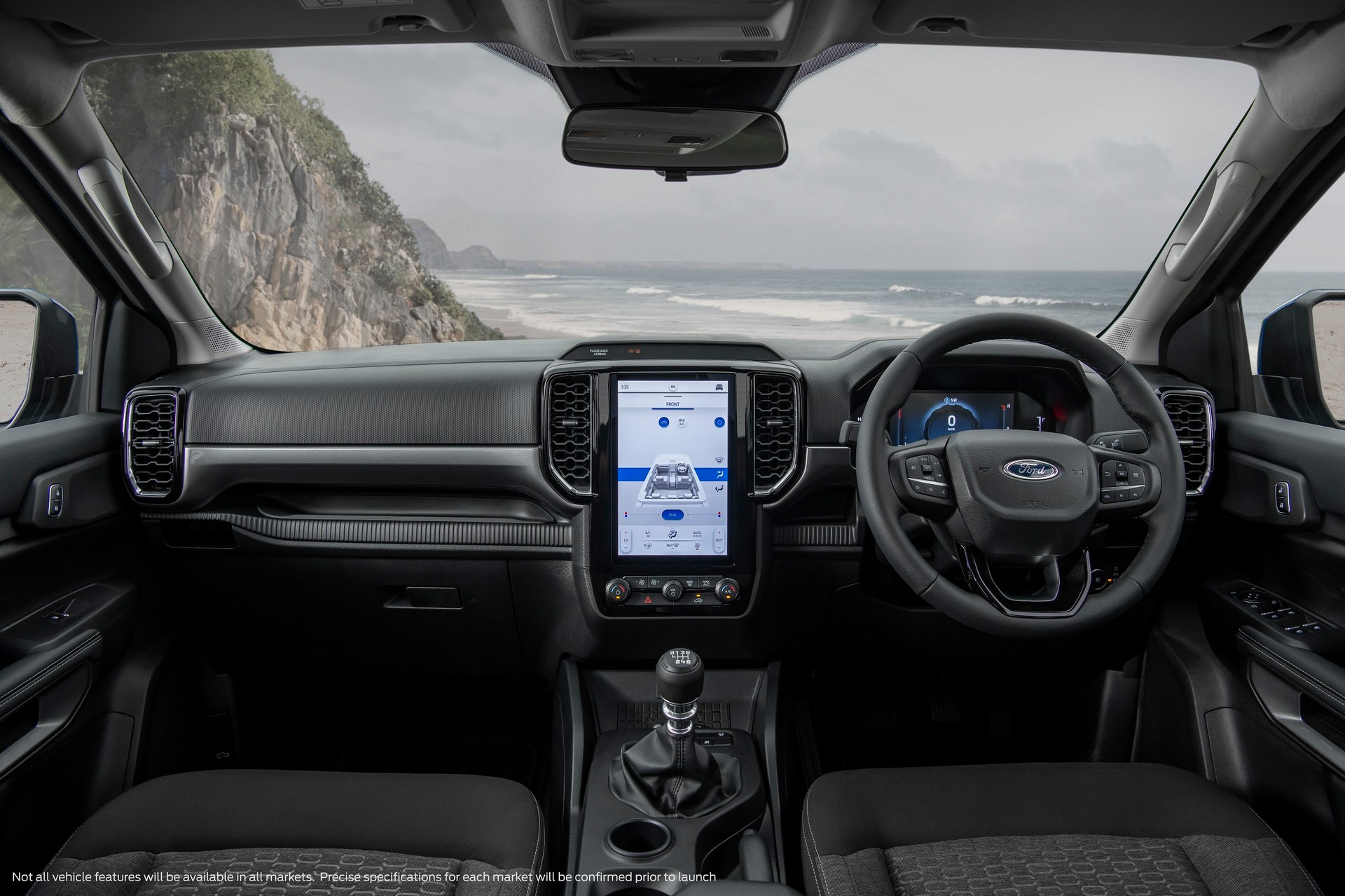 While the previous Ranger was saddled with an outdated interior, that’s no longer the case as the latest pickup features a high-tech cockpit with a digital instrument cluster and a 10.1- or 12-inch SYNC4 infotainment system. The latter have a portrait orientation as well as a dedicated off-road screen that allows owners to “monitor the driveline, steering angle, vehicle pitch and roll angles.”

Technology is a Ranger’s forte. It has an integrated modem, which allows for connectivity to modern technology. FordPass is a mobile app that allows users to remote start, unlock and lock the vehicle. It also lets them check its condition. Over-the-air upgrades will ensure that the model’s performance improves with age.

The Ranger has a modern dashboard that features stylish air vents, painted trim and a new design for tech. Elsewhere, there’s a revised center console, minimalist switchgear, and a stubby “short-throw e-shifter” on models equipped with an automatic transmission. You will also find higher-quality materials and contrast stitching, as well as a brand new steering wheel.

Ford didn’t go into many specifics, but they confirmed the redesigned Ranger will offer a wireless smartphone charger and clever storage solutions. The company stated that the truck features more storage options, including bins underneath and behind the rear seats and an integrated glove box in the upper part of the dash.

Three Turbodiesels And An EcoBoost Four-Cylinder 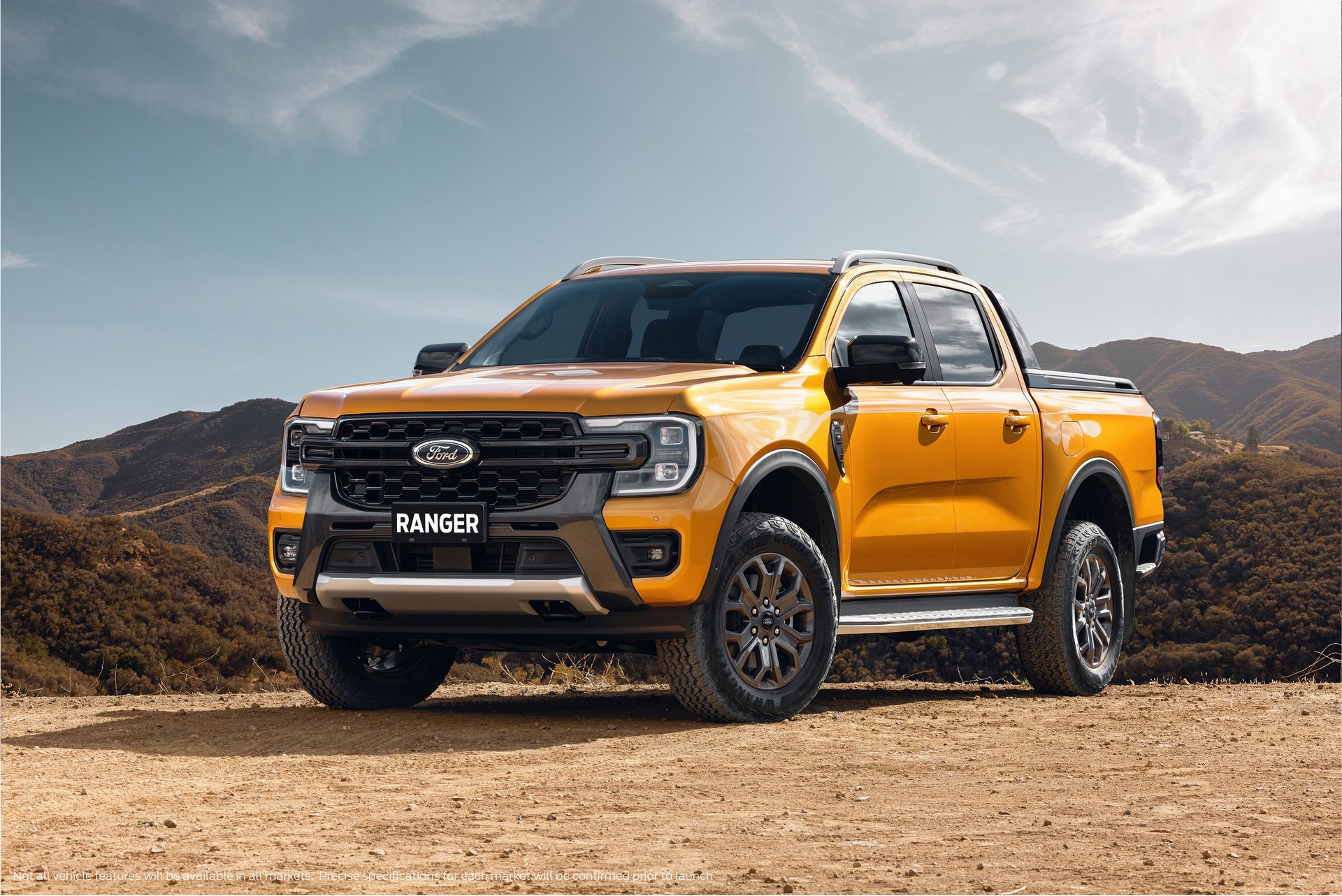 Under the hood, there will be three turbodiesels including a new 3.0-liter V6 which reportedly feels like it has “endless” levels of power and torque. Ford didn’t provide numbers, but said the V6 will be joined by a 2.0-liter four-cylinder that is available with one or two turbochargers.

The variant with the single turbo will be available in two different configurations, while the twin-turbo four-cylinder is billed as a “more sophisticated” option that should appeal to customers seeking a combination of performance and fuel efficiency.

The truck’s petrol version will come with the EcoBoost four-cylinder 2.3-liter EcoBoost. It should be immediately familiar as it’s used in everything from the Bronco to the Mustang.

The market will offer a variety of engine choices and transmission options, but the Ranger can be ordered with one or three different gearboxes. A six-speed manual will also be available, as well as a six-speed automatic that was carried over from the previous model and an up-to-date ten-speed auto. 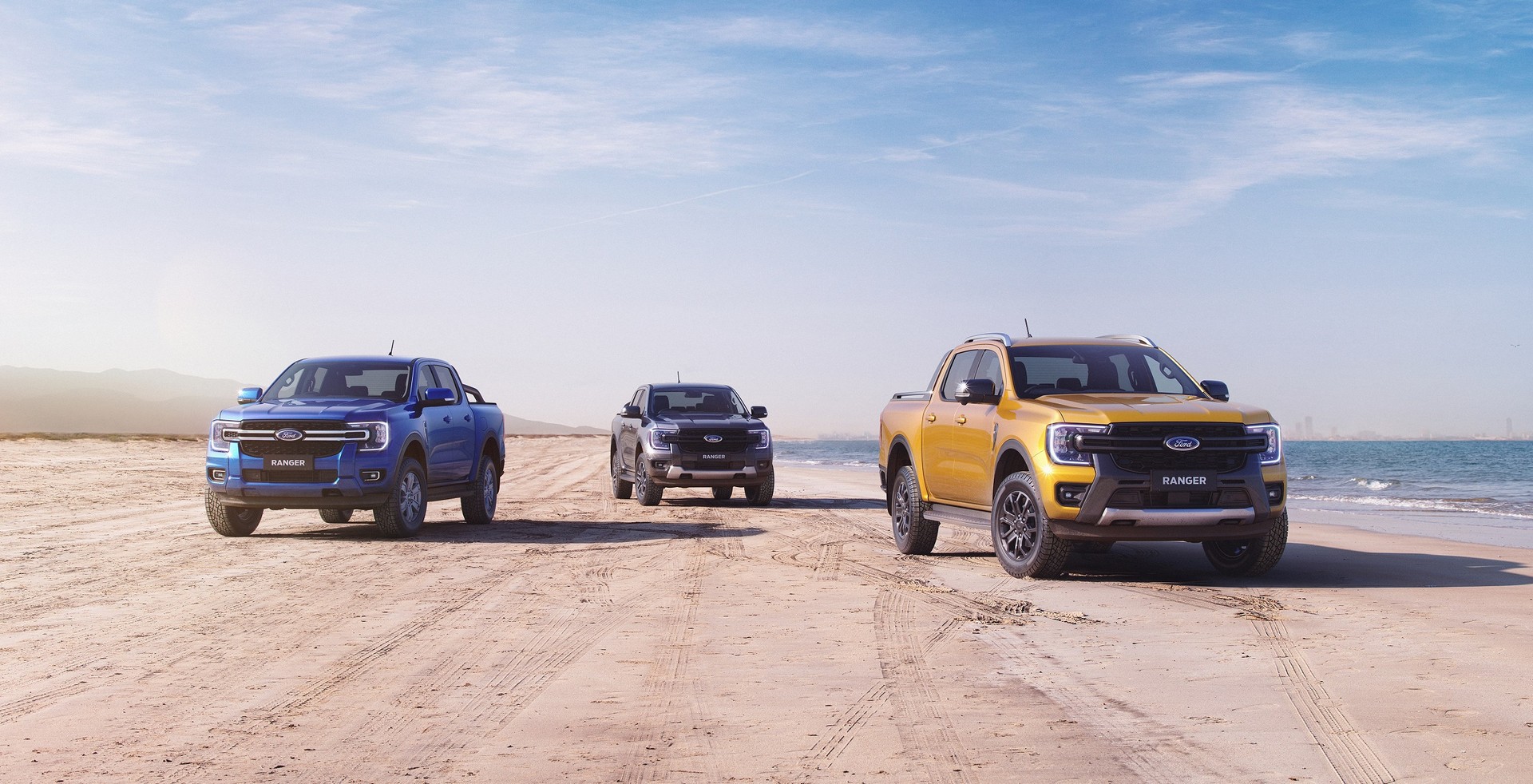 Ford didn’t say much about the truck’s underpinnings, but they confirmed the model rides on an “upgraded chassis” and features a “hydro-formed front-end structure [that] creates more space in the engine bay for the new V6 engine and helps future-proof the Ranger for other propulsion technologies” such as the plug-in hybrid powertrain that is expected to be offered in Europe.

To improve your approach angle, the front wheels are moved forward. To provide a better ride on and off-road, the rear suspension dampers were also relocated.

Two four-wheel drive options will be available for the truck to help with off-roading. The first is an electronic shift-on-the-fly setup, while the second is a more capable “full-time 4×4 system with a reassuring set-and-forget mode.”

Ford Will Begin Production Next Year. However, Ford is keeping mum about the US-Spec Pickup 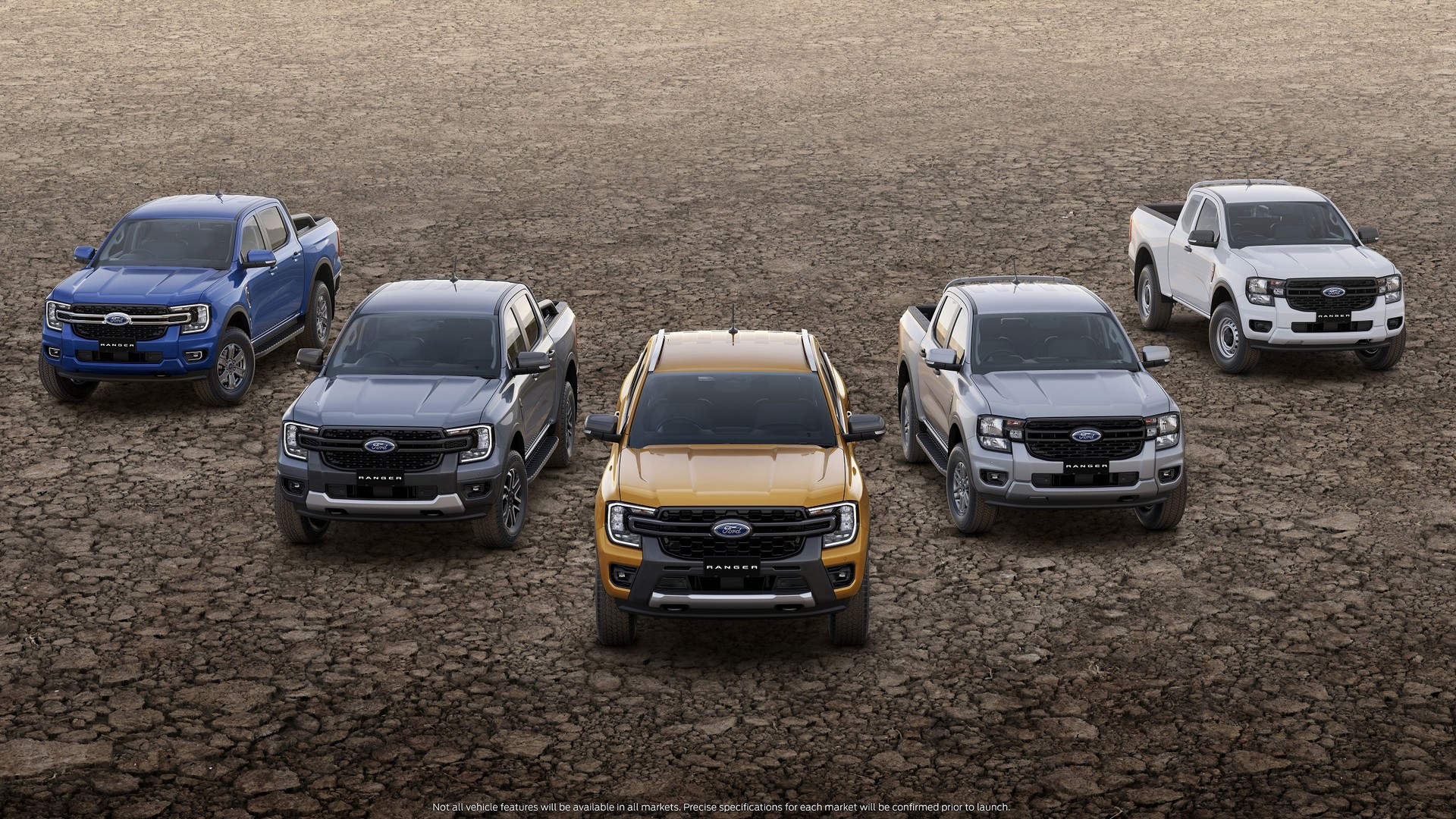 In Thailand and South Africa, production of the new Ranger Ranger model will begin next year. We’ll learn more about the model closer to launch, but most of our readers are probably more interested in the US-spec pickup.

We asked Ford about it and the company told us, “We’ll share more details about the next-generation Ranger for North America at a later date.”  However, we expect it to arrive for the 2023 model year.