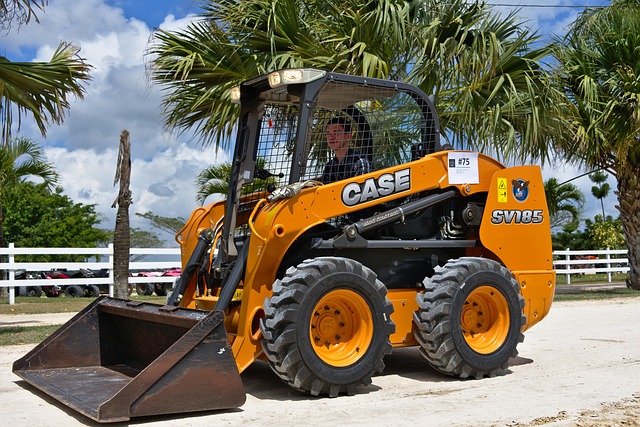 If you’re involved in construction, or if you plan to be soon, you may work with skid steers at some point. But what sort of projects can you expect to find them on?

A skid steer loader is a small four-wheeled vehicle generally meant to save labor. It gets its name from the way it turns. Because the wheels on each side of the vehicle are operated separately, and sometimes at different speeds, the vehicle turns by dragging its wheel pairs along the ground (or “skidding”).

They are capable of zero-radius turning, making them extremely useful in compact spaces. For certain terrain, they can also be equipped with tracks instead of wheels. In fact, they can generally be fitted with many types of skid steer attachments to increase their usefulness for different tasks.

They have a variety of uses in construction and other high labor professions depending on their size and attachments. In general, a smaller skid steer is more useful for a job that requires precision in tight spaces. A large machine will be more useful for tasks involving transporting heavy materials or extreme labor.

Skid steers equipped with loader bucket attachments are frequently used to transport materials. This can include tools or equipment being moved to or from a construction site.

Most commonly, however, they’re used to transport rocks that are too large to move by hand or wheelbarrow. The purpose of this can range from clearing rocks out of a construction site to placing large landscape rocks in a decorative fashion. While the skid steer is certainly the most efficient option to move large rocks, it can damage grass, so caution is advised while driving one across a lawn.

Skid steers are also useful for transporting farm materials. For example, a skid steer equipped with a bale attachment can easily move large bales of hay, a task that can be extremely difficult by hand. They’re also small enough to drive inside factory farms and scoop out waste.

There are a number of possible uses for skid steers in demolition. An example is the use of demolition shears in soft demolition. These shears assist in cutting concrete as well as the removal of flooring, drywall, and asphalt. This is useful for safely and effectively demolishing smaller structures and disposing of the components properly. These shears can also be used to remove small trees for build sites.

It’s impossible to overstate the usefulness of skid steers when it comes to setting foundations for construction sites. When equipped with the proper bucket attachment, a skid steer can easily dig the foundation for a building.

It can then pile surplus dirt to be removed from the site. A skid steer can also use a bucket attachment during the grading process. It’s important to note that in this case, the bucket should be slightly wider than the machine itself. The machine can then use the bottom of the bucket to start smoothing out bumps in the land.

While these are some of the most common uses for skid steers, it is an incredibly versatile machine capable of some more obscure tasks as well. For example, in snow/ice emergencies, skid steers can be equipped with a snow plow attachment in order to clear roads or other areas.

They can also be equipped with rotary brooms to clean large, industrial environments. Additionally, they can be equipped with forestry mulchers and root grapples to remove fallen trees and stubborn roots in record time.

While skid steers have an incredible amount of uses, they won’t do much good if they aren’t operated safely. It’s imperative to follow safety guidelines to avoid hazards with skid steers. Pay attention to the weight and center of gravity of the machine, and always maintain equipment and familiarize yourself with an attachment before use.